Signs of an Eating Disorder 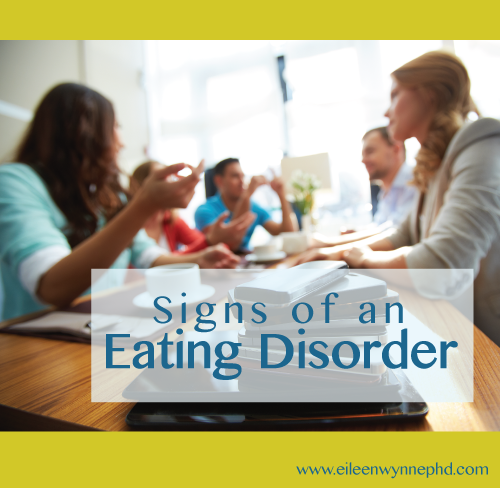 In the United States, it is estimated that between 24-30 million teens and adults have eating disorders. Women and girls tend to have eating disorders more frequently than men and boys, but in recent years, the number of males with eating disorders has increased to about 10-15% of the overall number of individuals with eating disorders. Living in a culture that is pretty much obsessed with image, in which magazines and online sources crop and airbrush models and celebrities to perfection, can have an impact on how people see themselves. This can be particularly damaging to emerging adults who are in the process of refining who they are as autonomous individuals. It is between the ages of 12-25 that eating disorders are most common. It can be difficult not to feel hyper-conscious of your body when society is telling you that to be happy and successful, you must look a certain way, it is almost impossible to escape the pressure to look perfect.
While being fit and taking care of the body is very important for good health, sometimes a person can take it too far and become obsessed with how they look, deriving feelings of success and self-worth from appearance. The need for control over the body can lead to anxiety and depression. In fact, about half of people who have an eating disorder also meet the criteria for depression. Eating disorders can be very dangerous, leading to increasing feelings of anxiety and, in extreme cases, death. Of all mental illness, eating disorders have the highest mortality rate.  Eating disorders are especially tricky to deal with because they are not actually about weight or food intake. They tend to be a way of dealing with emotional issues, stress, and anxiety. It may seem like a problem that is easy to fix, but it is more challenging to deal with an eating disorder than you may think, as the root cause is emotional. People with eating disorders tend to use their relationship with food to cope with uncomfortable or painful emotions.
What types of eating disorders are common?
An eating disorder can manifest in many ways. Basically, it is a distorted attitude about food, weight, and body image. You may observe a series of more and more extreme and restrictive diets and obsessive calorie counting. In cases where one eats less and less, becoming more thin and rigid about eating rules, you may suspect anorexia. In other cases, eating disorders can take the form of binge eating followed by the use of vomiting, laxatives, compulsive exercise, or fasting to counteract the effects of the binge. While individuals with this type of cycle, which is called bulimia, often stay about the same weight, the behaviors can be extremely detrimental to the body. Finally, binge eating disorder is an eating disorder in which people compulsively overeat, consuming large numbers of calories, followed by feelings of intense guilt and shame.
Is it an eating disorder?
If you think the behaviors that you are observing in someone you care about may be an eating disorder, here are a few things to check for. The following list may help you to recognize the clear signs and red flags of an eating disorder.
Someone with an eating disorder may do the following:

If you observe several of these signs, you may want to consider discussing them with your friend. Be aware that people with eating disorders can be very uncomfortable talking about them.  Your support and encouraging your friend to seek treatment can make all the difference. Read my next blog post for advice on the steps to take if you suspect that a friend may have an eating disorder.