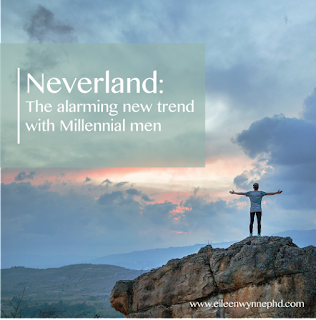 Recently there have been several articles in prominent publications and television news pieces about the alarming trend of young men failing to launch into adulthood.  Many of the articles look at this disturbing trend from the angle that positions young women as more ambitious and better educated than their male counterparts making the story seem like a positive one. In reality, even though celebrating the achievements of young women is wonderful and vitally important to our society, the fact that it seems to be happening at the expense of young men, or in contrast to the dramatic decrease in motivation of males, is a very real problem with potentially far-reaching consequences. Women are not getting ahead strictly on the basis of increased effort, though they are definitely working hard. There is another factor at play that we could not have predicted.
According to a recent article in the UK’s Daily Mail, new research shows that The U.S. “is producing a generation of 'lost boys' who lack the drive to start their careers and instead drop out of college and end up languishing in their parents' basements surfing the internet.” This assessment may seem harsh, but the data backs it up. Women are earning a larger percentage of degrees than their male counterparts. In addition, between 1970-2007 women’s salaries have increased by 44%, while men have only seen a 6% increase. While this increase may point to the equalizing of the pay gap in society, it may also be a component in the lack of motivation we are seeing in young men. The unemployment rate for young men has also increased. From about 5% in 1950 to what we are currently experiencing, the highest recorded rate of  20%.
% Degrees Earned by Gender 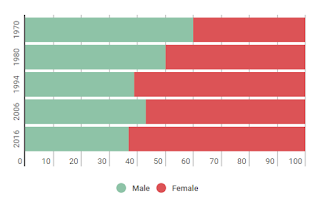 Implications for greater society
An article posted by CNN linked this new set of behaviors, lack of motivation, and failure to mature to larger issues; to things like men being more distant from family and out-of-wedlock birthrates.  The educational gender gap also means that there are more females in college than males, and they have been called the new economic underclass as many young men may fall behind losing prospects for partnership. In fact, we are already seeing and an increasing number of young couples are delaying marriage or foregoing it altogether. Studies have shown that men between the ages of 18-34 spend more of their time playing video games than those who are 12-17. Many young men stay at home, living with parents longer and have lower employment than female counterparts. The very real problem of a generation unprepared for the challenges of managing adult life and participating in larger society.
What is behind this alarming trend?
Numerous factors have been pointed to as the causes of this trend:
Unfortunately, no one has yet been able to pinpoint the true origin of the problem. To date, we have mostly noted the symptoms and begun to study the trends more closely. What we do know is that in the current culture, many young men are failing to set and achieve goals.  They are not meeting  responsibilities or achieving on par with their potential. And what we also know is that we don’t know quite how to address the issue.
Shifting ideas of adulthood
It may well be that what we are witnessing is a generation developing new definitions of success and adulthood. New ways of approaching politics, career, consumerism, and relationships are emerging with the Millennials. There have been innumerable articles written about how Millennials value doing good over making lots of money and how they tend to want to rent rather than buy a home. There are many values held by this emerging generation that differ strongly from the ones that came before. It is possible that this new trend is part of the transition to a new way of relating to life and society.
Sincerely,
Dr. Eileen Wynne
References
http://www.dailymail.co.uk/news/article-2011261/Americas-Lost-Boys-Why-ARE-young-men-failing-grow-up.html
http://www.phillymag.com/articles/the-sorry-lives-and-confusing-times-of-today-s-young-men/
http://www.today.com/health/boys-men-why-guys-arent-growing-2D80556234
http://www.nytimes.com/2016/04/10/education/edlife/teaching-men-to-be-emotionally-honest.html?_r=0
http://pages.uoregon.edu/eherman/teaching/texts/DiPrete%20&%20Buchmann,%202013%20Briefing%20The-rise-of-women.pdf
http://www.cnn.com/2011/10/04/opinion/bennett-men-in-trouble/